I installed iOS 7 on my iPhone immediately after it was released to developers. My co-workers thought I was crazy.

“Your primary phone?!” they all asked.

But seriously, I have a few good reasons to love iOS 7. First, it fixes my number one gripe — that it’s such a hassle to update iPhone applications.

I wrote a whole post on the topic a couple months ago for the Pastry Box Project. I wasn’t too optimistic about ever seeing the problem fixed.

I think ideally your iPhone would download the latest versions of your apps (and iOS) in the background, maybe at times when you’re connected to wifi. However, I don’t see this happening any time soon.

(If only I could wish features into existence more often…)

My iPhone now gets the latest versions of my apps automatically. John McCain seems pretty excited about this feature too.

Thanks to Tim Cook for the automatic iphone app updates! #apple#wwdc

Automatic updates seem like such a great idea… but then I worried about the consequences. What if an app updates at a really inconvenient time?

Today I was waiting in the subway tunnel for my Muni train. No Wi-Fi. I was all ready to start reading a book on my Kindle app when I noticed the Kindle app was stuck in the middle of an update. Oh no! Code red! Hypothetical situation has become reality!!

I checked the status of the update in the App Store app and noticed there was an option to “pause” the download. I clicked the button and my Kindle app returned to normal. Phew.

In addition to automatic updates, there are a couple other nice features of iOS 7 such as the Control Center and the camera improvements. However, the thing that’s got most people talking is the new design.

I’m not a designer so I’m not going to get into the layout of the icons or the lack of shadows and bevels. I just wanted to note that I think the design is a huge improvement for developers.

I downloaded Xcode 5 at the same time as iOS 7 so that I could start developing iOS 7 applications. I was really impressed by how much better all the default styling and components look.

It’s also just fun to ask, “so what’s your tintColor?”

I ran for a year 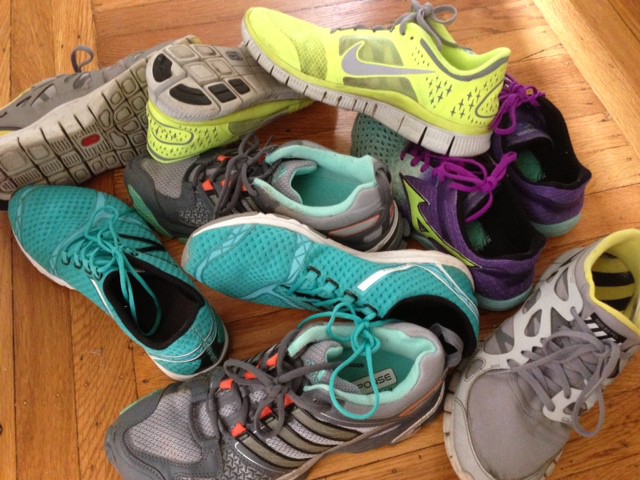 I started running a year ago. I had just begun a new job after leaving my own startup. I was tired of being a founder and desperately needed a break. I wanted to have a calmer lifestyle and I wanted a hobby.

Running seemed like a great choice for a hobby. As a computer programmer, my brain gets a great workout but my butt sits in a computer chair all day. I thought that a little bit of exercise would balance it out.

I didn’t entirely start from scratch. In the past I had jogged every once in a while, maybe once a month. I had a pair of Nike running shoes that my parents had bought me for Christmas and some grungy workout clothes. On the recommendation of my coworkers, I downloaded the free Nike+ running app for my iPhone.

My first run was just two miles at 12 minutes per mile. That’s pretty slow. However, for a non-athlete I felt fairly good about it. I jogged a couple more times that week. After a couple weeks of regular jogging, I set a goal for myself:

I knew I would never be fast enough to impress anybody so it didn’t make sense to make speed my goal. I could have picked a race to train for, a 5k or half miler, but I knew how those ended. Everyone seems to quit running right after their big race. I wanted to do something different. I wanted to not quit.

My goal involved not going too long between runs. If I skipped more than a couple days, wouldn’t that be quitting? So I started running four and five days a week. The longest I went between runs was three days when I was in Hawaii for vacation.

My goal made all the difference. I was still slow, but I could at least feel good that I was running a lot. I’d have good days where I would run fast and feel great but I also had lots of bad days where I was tired and just didn’t feel like running. In retrospect those days were almost better than the good days because they reinforced my goal - I didn’t quit.

I ran my first 5k on Halloween, nearly five months after I had taken up running as a hobby. I wore a costume - fairy wings - and tried to keep up with a random guy with an owl on his head. I finished in 28 minutes and was super happy. I learned that racing wasn’t always about being the fastest, but doing my personal best.

I also learned that there are lots of kinds of runners. I’m definitely a certain kind - the 30 year old woman who wants to stay fit. There’s also the 20-somethings who ran in college, the middle-aged dads and moms, the older runners, and even little kids. During my next 5k race, my primary goal was keeping up with the 10-year old boy running next to me.

There’s lots of good things about running. I run outdoors so I get some fresh air and occasionally some sunshine (lots of fog here in San Francisco). My favorite part about running is when I do long runs on Sundays. I sometimes pick a cool or weird place to explore and run to that place. I’ve seen the Seward street slides, the tiled steps at Moraga and 16th, the Wind Harp tower, and nearly all of Golden Gate park. Did you know there are two windmills in Golden Gate park? I thought I imagined them after running six miles to get there.

Running also gave me a new perspective on my body. I’ve always been so focused on my mind and my body was just something that I lived in. I finally felt that my body had a purpose - to run.

There are lots of downsides to running as well. I sweat a lot when I run. A LOT. I’d come back to the office after a run and the office dog would run up and lick my sweaty legs. I had to stop caring if people saw me all sweaty and gross.

Thanks to my slow pace, I haven’t really been injured yet. I have tripped and scraped my knees, more than once. I’ve also lost a couple toenails after long runs and big hills. I’ve learned to keep my toenails short and watch out for gaps in the sidewalk.

My one year running anniversary was last Saturday, June 8. I had signed up to run a race on the exact day of my first run. Sadly I never got to run that race, it was cancelled shortly after the Boston Marathon bombings.

Instead of running a race on my anniversary, I signed up to run a full marathon in December, hired a running coach, and set a regular running schedule.

I’ve started to think of myself as a runner.

If you would have told me a year ago that I would be working out almost every day and running 100 miles a month I would never have believed you. Running really snuck up on me. I had modest aspirations and didn’t really care if I was great at running. I just wanted to stick to my one goal.