A while back I collected some data to determine how many people were using Facebook, Twitter, and OpenID to log in to TypePad. It was fairly obvious to me that people liked logging in using existing accounts.

My new product, Grove, provides hosted IRC servers for teams. Since IRC appeals mainly to developers, I thought it would be great to allow people to sign up and login with GitHub. 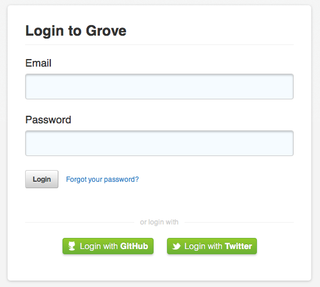 With TypePad, the most popular service for logging in was Facebook. However, I purposely didn't add a Facebook log in button because I felt that our target audience (developers) wouldn't be as likely to use it. In fact, they might actually find a Facebook button a turn-off.

Our team isn't collecting much data yet, but we do know how many accounts total are connected via GitHub or Twitter.

I guess I don't need to add that Facebook button any time soon.