Chris Wanstrath and I originally developed Hurl for the 2009 Rails Rumble where it won Most Complete. The idea was to create a simple web version of cURL, a command-line tool often used to test web APIs.

Hurl is super easy - just enter a URL and any extra parameters such as HTTP headers, body parameters, and authentication and then click "Send." You'll get the response and can save and share it.

By open sourcing the code behind Hurl we hope that other developers will be able to build on the concept. One very requested feature is to create an embeddable version of Hurl that can be used in developer documentation for easy try-it functionality.

Today at Six Apart we released Motion, the project that I've been working on for the past year along with Six Apart's open source team. 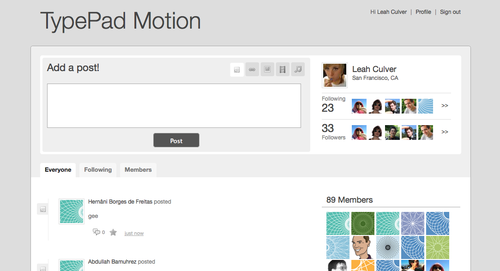 Motion is a new microblogging platform that can be used to create community sites.  As a member of a Motion site you can post content such as messages, photos and video and participate in discussions around that content. Check out the Metric, Ryan Star, and Zachary Quinto communities to see how fans are using Motion to keep in touch.

I'm also excited that we have released the Motion code as open source. As a developer you can create your own community site with an unlimited amount of customization. Motion is a Django application with a few underlying Python libraries that interact with TypePad as a datastore (via the TypePad API). Motion also supports OpenID login and the OAuth authentication open protocol.

Since Motion is build on the TypePad API, you can also use the underlying libraries to create some other unique kind of publishing site built on TypePad. The libraries are very modular, so you can pick and choose the pieces you need for your specific project.

You can get started here on our developer site.

For good measure, here are all the links to the libraries on GitHub:

A big thanks to the Motion and TypePad API teams!