This Thursday I'll be speaking at the Canadian University Software Engineering Conference (CUSEC) in Montreal. I'm giving what amounts to a motivational talk, which is totally new for me.

If you're a Canadian student, I really hope you'll be there. It seems like everyone has a great time and they have some very cool speakers this year. The hit talk last year was by Zed Shaw (of some kind of Rails fame) and it's pretty funny. Check it out.

Zed Shaw - The ACL is Dead from CUSEC on Vimeo.

@zeitgeist !the end of the dodgeball era

This week Google announced it would be shutting down Dodgeball, a text-messaging social networking application that they acquired in 2005.

I am a user of Dodgeball. 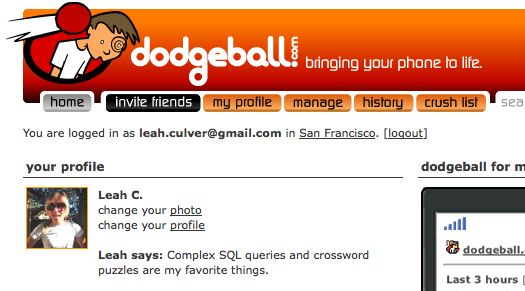 My group of friends uses Dodgeball to "check in" at various bars, restaurants and private venues (house parties) around San Francisco. Every night I get a bunch of text messages telling me which bars my friends are at and the exact street addresses of those bars.

Dodgeball never attracted a ton of users, but it inspired the few users it did have to create the next generation of similar services.

Well, really Pownce and Jaiku are too (the "Leah C." short name format on Pownce is a nod to Dodgeball). Just take a look at the current top Dodgeball users in San Francisco. We love Dodgeball - it's our prototype and inspiration. Among my group of friends it is OUR social networking site. Pownce was used by a few of my good friends, but Dodgeball is used amongst all us.

It pleases me to see the influence Dodgeball has had on how we interact via mobile and short messages. However, Dodgeball still has no real competitors. I don't think there's anything out there that has the simplicity and the core database of places. As to why Dodgeball never went mainstream, I hate to think that its because most people don't know how to party (or party-hop).

I have heard that Dodgeball may be rebuilt - either inside Google or not. For now the service is still running... no official shut-down date has been announced.

So until then, let's party.

* the San Francisco outdoor biker bar, Zeitgeist, is said to be the most popular location on Dodgeball.

** my favorite blog post about Dodgeball is this one by Rick

The statistics on user password choices over at Coding Horror are pretty scary. Coming up with a password that's easy to remember, yet hard for another person (or bot) to guess (or attack) is actually pretty tricky. I'm a fairly flakey person and I had a really difficult time coming up with good passwords until the sysadmins at the University of Minnesota taught me their trick.

Just think of a phrase that means something to you and use the first letters of that phrase for your password.

For me I've found it's easiest to use a lyrical phrase, maybe one that relates to the website or machine I'm logging into. For example, I might use lyrics from the Beatle's "Lovely Rita" for my student loan account (for some reason loans feel "metered" to me).

"Give us a wink and make me think of you" could be: gua*ammth0y

The "*" is a wink and there's a zero instead of an "o". Pretty easy for me to remember, but not terribly easy to guess.

Hmm... maybe ";" makes a better wink than "*", which is more of a kiss, but it doesn't really matter. The more it makes sense to you and nobody else, the better ;)

Need a song to get started?

I finally decided to try out Google Apps for my new baconfile.com domain. While poking around in the settings I noticed that it accepts OAuth for authentication. As one of the authors, it still feels really weird to see OAuth used by big companies.

On a related note, I hope this is the last time I have to FTP an image to my server just to display on my blog. Sorry Fetch!

This year I'd like to do something I've never done before...

I'm tired of having a bed on the floor and no other furniture. While it makes for cute startup stories, I don't have a startup anymore. :D

I just moved to the Mission last week and I love my new place! I've been searching for my permanent home in San Francisco and thanks to Craigslist RSS feeds, I was able to find an awesome apartment. Time to start decorating!

Looking back at last year's resolution I realized that it's pretty difficult to measure how easy-going I've become. I've definitely been able to relax more since starting work at Six Apart. I definitely was less stressed out than the previous year and my svn commit messages got more humorous!