Flip-flops and an Apple product recall

This is a story about an Apple product recall and some flip-flops.

Last Sunday I tripped over my iPhone cord.

All the outlets in my apartment are at floor level and I plug my iPhone into the wall outlet nearest my bed. As usual, I was wearing flip-flops (as many computer programmers do) and the cord got caught between my toes and the sole.

The result was that I pulled the adapter out of the wall, breaking off one of the prongs. I had a metal prong sticking out of the outlet! 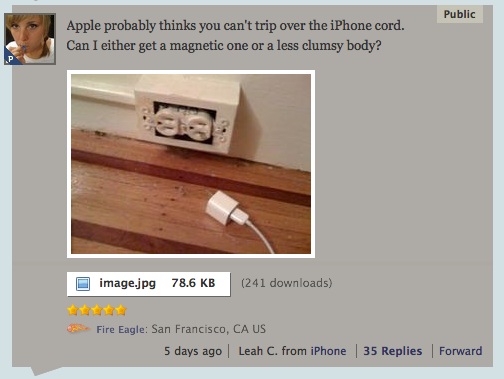 Freaked out about getting electricuted, I left it alone for a few days. The Pownce community offered some practical and creative ways for me to remove the prong, but having previous experiene with electric shocks (freshman physics class) I had no desire try my luck.

I went out and bought a new adapter. 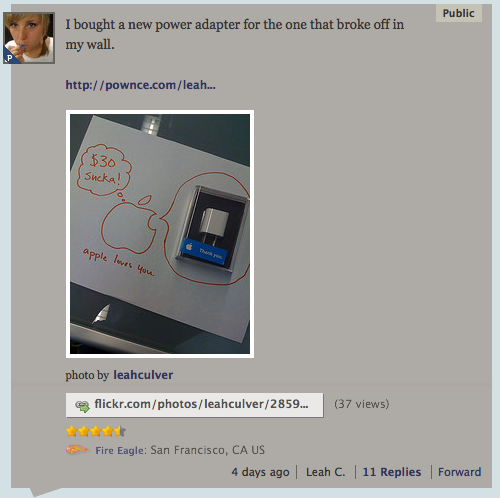 Then, Thursday during work, I tripped over a printer cable when it got caught in my flip-flop! Ethan from the podcast What Should You Know, works next to the printer so I told him the story of the iPhone adapter prong. Apparently he knows a lot (hence the podcast) and pointed out that one prong wouldn't connect the circuit (duh) so I should just pull it out.

When I got home I was feeling more confident and a bit silly. I got out a pair of rubber-handled pliers and gingerly touched the prong with the tip of the pliers. Nothing. Yay! I yanked out the lone prong and threw it away.

I thought that would be the end of the story.

"that under certain conditions the new ultracompact Apple USB power adapter's metal prongs can break off and remain in a power outlet, creating a risk of electric shock."

Whatever actually caused the recall, just let me keep thinking it was my flip-flops.